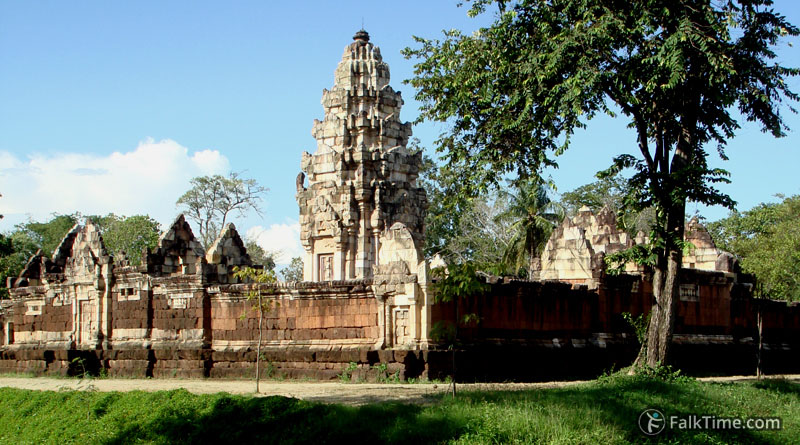 Sadok Kok Thom is a Khmer temple dedicated to Hindu god Shiva. It was built in 10th century from laterite and sandstone. Around 12th century Hinduism in this area had been replaced with Buddhism, so Sadok Kok Thom became a Buddhist temple.

The name of the temple relates to surrounding area – a big swamp with abundant reeds. Well, it is still here.

The most valuable archaeological finds are 2 steles with ancient Khmer inscriptions, but you won’t see them at Sadok Kok Thom as they were transfered by Fine Arts department to the National Library. The 1st stele announced the construction of the temple, while the 2d inscription praised Khmer king’s (Udayadityavarman II) participation in Prasat’s renovation in 1052. Both texts delivered scholars a lot of valuable information about every day life of that time.

Thailand and Cambodia are still arguing over the border, where its right location is. They have been to International Court of Justice, but as it may happen, losing side is completely unsatisfied with court’s decision. Of course Sadok Kok Thom is a coveted historical site for Cambodia.

When Vietnamese invaded Cambodia in 1978, the area around Sadok Kok Thom was turned to a refugee camp Nong Samet. Ruins of ancient temple were used for religious services. The camp was here until 1985 and it had played significant role in support for Khmer People’s National Liberation Front.

Restoration of ruined temple was held only several years ago, as Sadok Kok Thom had been mined during military conflicts. Landmine clearance project was held together with Japanese and it was finished in January of 2004.

Note: there’s no infrastructure in temple area at all, even no possibility to buy some water.

Take the map of Sa Kaeo province with you – just click the star and it will be saved in your Google account. Any locations in this region that I will add later will appear on your map.